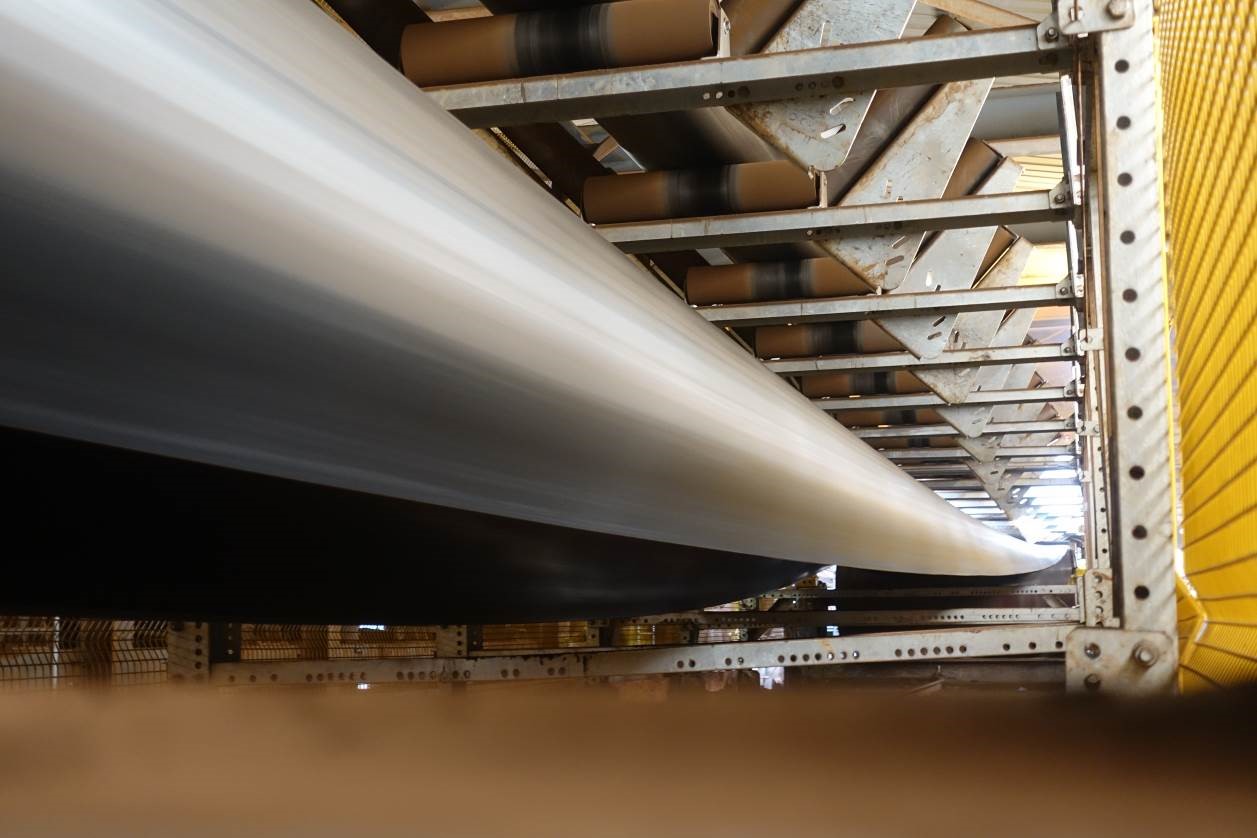 Project implementation took around eight months. In only four months, the system provider installed the mechanics of the systems with a total conveying length of approximately 6.6km and a conveying capacity of 5,500 tons per hour.

Shandong is an eastern Chinese region on the Yellow Sea. More people live here than in Germany and Austria combined, while the area of Shandong is only about half the size of Germany. Its name translates to “East of the mountains” and refers to the Taihang mountain range, east of which lies this coastal province, strategically located between the Chinese economic metropolises Beijing and Shanghai. Another advantage is its access to the Yellow River: the region has a dense network of waterways and several important trade and transshipment ports. The steel manufacturer Shandong Steel Group & Rizhao Steel Group is also headquartered here.

For its manufacturing, the company requires large quantities of iron ore which is delivered to the port of Langshan. In order to transport the material to the plant, the company previously relied on a closed Pipe Conveyor, but the capacity was gradually exhausted and was no longer able to handle the transport volume. The managers were looking for an economical solution and approached the Shandong Harbour Engineering Group. The engineering service provider was commissioned as general contractor to create the infrastructure. Now the question was: Should the plant use a well-developed expansive railway and road network or invest in a conveyor system solution?

Shandong Harbour Engineering Group turned to BEUMER Group. The system provider develops conveying solutions for a variety of bulk materials – for example open troughed belt conveyors or closed Pipe Conveyors. BEUMER engineers were also involved in the system, which is already in operation.

Pipe Conveyors – does it pay off?

“Of course, we had to prove that this investment was worthwhile”, says Zhengwei Zhang, Project Manager at BEUMER Machinery (Shanghai) Co., Ltd. “In advance, we performed an economic evaluation.” This included a feasibility study, an investment calculation, the project schedule and a cost-benefit analysis. Different variables are required to compare the costs of Pipe Conveyors with those of trucks or trains, for example the transport costs per ton, the material volume that needs to be moved within a set period of time, and also the specific investment costs and the tax depreciation plan. “More costs are added for the construction and the supply of the conveyor as well as for the mechanical and electrical installation”, explains Zhengwei Zhang. Complex construction work is also often necessary. The initial investment in a conveying system is usually very high, but the operational costs of a Pipe Conveyor can be considerably lower depending on the application. Important factors include the estimated cost of a ton of material to be moved or, in the case of vehicles, the number of round trips per hour. “Our Pipe Conveyors lead directly to the destination and we can immediately adapt it to the corresponding site structure,” explains Zhengwei Zhang. A significant advantage of BEUMER technology is that it enables horizontal and vertical curves.

Depending on the characteristics of the conveyed material as well as of the system’s geometry, it is possible to implement vertical curves with angles of inclination up to 30 degrees and horizontal curves with a deflection angle of up to 90 degrees. This ability to navigate curves reduces the number of supports and replaces the transfer towers, which results in substantial cost savings for the customer. The system transports the iron ore safely enclosed across various terrains such as roads, residential areas or rivers. During the projection phase of the system, BEUMER technicians use proprietary calculation software to determine the static and dynamic loads – loads, which do not only affect the belt but the steel structure frame as a whole. This is a prerequisite for safe and correct dimensioning of the structures.

BEUMER Group provides their belt conveyors with environmentally safe electric drives and low-energy belts. Therefore, especially in these times of climate change and increasing greenhouse gas emissions they are considered a more sustainable option. The motors used are usually adjustable, which permits the loads to be optimally distributed on the drive units under various operating conditions. The closed design of this conveying system also protects the environment from falling transported goods. Another advantage is the elimination of dust development on the running line. This is important because the section between the port and the plant leads through public roads and residential areas.

“Our evaluation of the various transport options enabled us to consider the total costs per ton over time”, says Zhengwei Zhang. “With this application, the Pipe Conveyor will pay for itself quickly, and the system is more environmentally friendly than truck transport.”

Together with the managers in Shandong, BEUMER engineers developed a solution that is optimally tailored to their requirements. The system supplier delivered a conveying system consisting of two Pipe Conveyors. The overall length is approximately 6.6km, the diameter 500 mm. At a speed of 5.15 m/s, the systems operating together convey up to 5,500 tons of material per hour considerably supporting the already existing conveying solution. In addition, a transfer tower is used.

BEUMER Group was responsible for the overall project, which included the design of the system and the entire steel structure. The completely enclosed conveying system ensures an environmentally safe, dust-free and low-energy transport of the iron ore. The system provider started the installation in September 2018 and commissioning took place only four months later. The complete project implementation took only eight months. “We are very satisfied with BEUMER Group’s single-source solution and the handling of the project”, states Liu Qiang, Executive Director and General Manager at Rizhao Port Shipbuilding & Machinery Industry Co.,Ltd, Shandong Harbour Engineering Group. “The two Pipe Conveyors allow us to work in a more economical way and we are optimally prepared for future capacity expansions at our plant.”