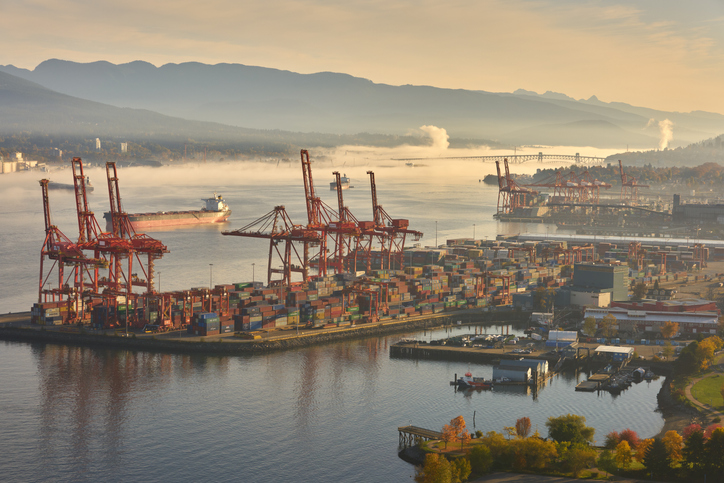 Following severe weather events in November 2021, the Port of Vancouver is experiencing significant congestion in ocean and rail. Multimedia Editor James Turner spoke to the Vancouver Fraser Port Authority about how it intends to solve the issue.

In November last year, the port suffered considerable capacity restrictions due to flooding throughout the Metro Vancouver and Fraser Valley regions.

In order to relieve some of the pressure facing the port, the Government of Canada contributed CA$4.1 million ($3.21 billion) to the port authority. A large portion of this sum went to setting up a temporary storage site for empty shipping containers in Richmond.

According to a recent Freight Market Update from Flexport, the Port of Vancouver has been facing serious congestion over the last few months because of these weather events, as well as external impact from the pandemic and geopolitical ripple effects. The port authority, however, insists its situation is getting better.

“At the port, we have a seen a marked improvement over the past number of weeks in rail loading productivity with Canadian Pacific (CP) Railway and Canadian National (CN) Rail having combined average loads of 60,000 feet per day over the several weeks,” Robin Silvester, CEO of the Vancouver Fraser Port Authority, told PTI.

“Over the same period, we have seen an increase in import container volume arriving in Vancouver with forecasted volumes now consistently in the 50,000 TEU range weekly, up from the low 40,000 TEU range earlier in the year.”

In order to help build capacity and streamline operations, the Vancouver Fraser Port Authority is leading a variety of initiatives and projects. These include:

Despite facing several challenges over the last few months, the Port of Vancouver’s container volumes are expected to continue to be strong over the remainder of 2022 as backlogged cargo makes its way through the supply chain.

While volumes in January and February were lower than previously expected, there was a strengthening recovery in March.

“The Canadian economic outlook appears to be holding up well,” continued Silvester.

“Steady consumer spending, even considering inflation, is expected to continue to drive import traffic. There could also be higher demand for Canadian commodities to help offset global market disruptions from the war in Ukraine.

“We anticipate a spike in import cargo shipments resulting from build-up demand related to China’s shutdown of manufacturing and transportation services.”