In conversation with: Port of Los Angeles 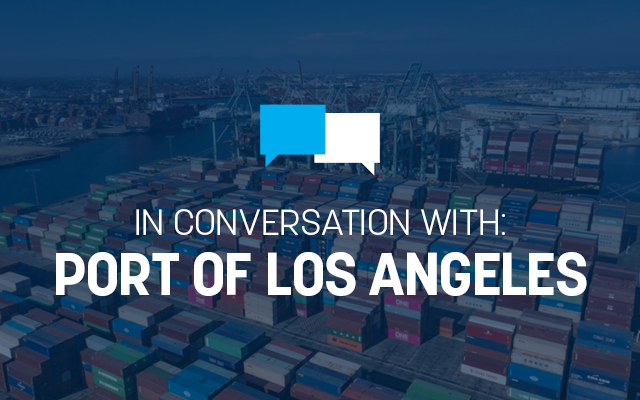 The Port of Los Angeles had a vastly successful 2021, breaking its yearly cargo record despite problems with congestion. Now, with the incentive of a “Container Dwell Fee” looming, we find out what 2022 might look like at the port.

Earlier this month, PTI Staff Reporter James Turner, caught up with Gene Seroka, Executive Director for the Port of Los Angeles, to discuss the effectiveness of this proposed fee, the port’s Clean Air Action Plan, and what it needs to before the fast approaching Lunar New Year.

This “Container Dwell Fee” was initially announced on 25 October 2021 but due to ageing cargo on the docks of Los Angeles and Long Beach steadily declining, consideration of the policy has been delayed a total of 10 times now.

“When we announced this fee back on 25 October 2021, I had stated publicly, and then at our Harbor commission meeting later that week, that I hoped this dwell fee was a miserable failure,” said Seroka. “That would mean that if we did not collect even a nickel, and that cargo was moving, it had the intended result.”

Even though shipping experts have seen that the removal of long dwelling import containers on the docks has slowed due to the recent holiday season, Seroka reaffirms that the port will implement the fee if needed.

The Ports of Los Angeles and Long Beach first announced their joint Clean Air Action Plan in 2006. Its recent aims see the twin ports working towards operating a zero-emissions fleet by 2030.

“Now it’s time to get after decarbonization and greenhouse gases,” the Executive Director continued. “The way to do that is to get to zero emissions.

The next year is set to be significant in working to meet these aims.

Lastly, Lunar New Year is fast approaching on 1 February, this is set to make the first of half of 2022 very busy.

“We see a pretty heavy rush coming in before landings, the third and fourth week of February out of Asia, then we’ll be able to move into a second-quarter where major retailers and home improvement stores are telling me they’re going to focus on replenishing inventory because that inventory sales ratio nationwide is still the lowest it’s been in a decade,” concluded Seroka.