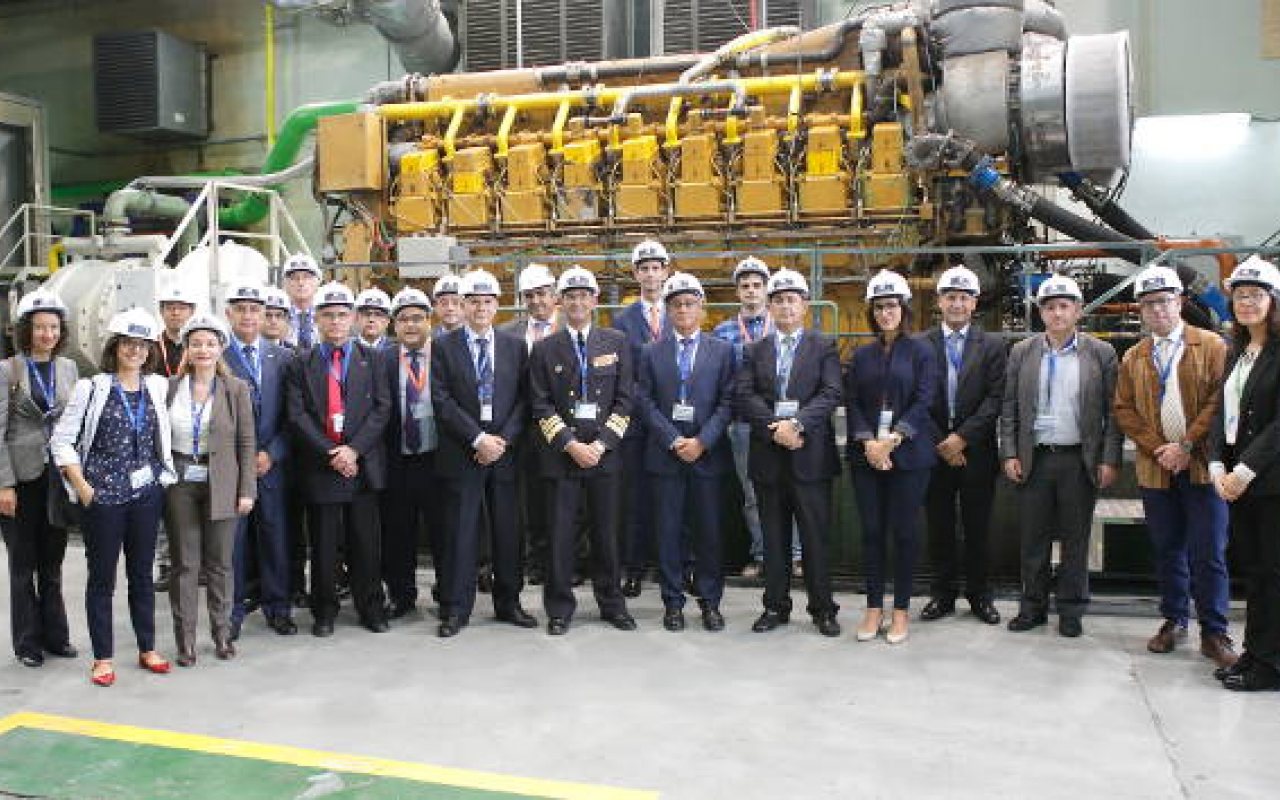 On October 27, 2016 in the Navantia facilities in Cartagena, Murcia, an event was held to present the adaptation of a Caterpillar 3618 propulsion engine to run on both natural gas (LNG) and diesel. The retrofit was carried out by the shipping company Fred. Olsen S.A.

During the event, which was opened by the Corporate Director of Systems, Alfredo Gordo, and the General Manager of Fred. Olsen S.A, Andrés Marín, details about the conversion of this engine were presented, as well as about its test bench validation according to the protocol established by the classification society DNV-GL.

In the next few days, the engine testing will be completed with the “Acceptance Test”, which certifies the safe and reliable operation of the engine in dual-fuel mode, in compliance with the technical standards and emissions regulations currently in force.

The validation of the retrofitted engine required one of Navantia’s test benches for diesel engines to be adapted, in accordance with the applicable legislation, in order to ensure its safe operation with natural gas.

Measurements of exhaust gas emissions from the retrofitted engine (FO3618DF) were carried out with the collaboration in the project of technicians and teams from the Polytechnic University of Cartagena (UPCT).

The initial data presented at the event regarding emissions from the retrofitted engine showed a 90% reduction in sulphur oxides as well as a reduction in carbon dioxide and in nitrogen oxides, when the engine is operating in dual-fuel mode with a ratio of 90% natural gas to 10% diesel.

After the event was brought to a close by Óscar Villar (Directorate General for Merchant Shipping), attendees were given a tour of the Navantia test bench. More than 50 participants—including representatives from the Spanish Army, the Ministry of Public Works, the Directorate General for Merchant Shipping, Harbour Master's Offices, Port Authorities, Enagás, collaborators and suppliers of the project—were able to see first-hand the retrofit of the engine and the facilities where the validation tests were performed.

This initiative forms part of the GAINN4SHIP INNOVATION project, co-financed by the European Union via the “Connect Europe” programme and coordinated by Fundación Valenciaport. Its main aim is to complete the world’s first retrofit of a high-speed ro-pax vessel, the Bencomo Express, so that it can run on LNG as of 2018.

The technology developed for the adaptation of this propulsion engine to dual fuel will be used to convert the four CAT3618 engines currently on the Bencomo Express, without any need to replace them with new ones. This internationally pioneering technology will be applicable to most high-speed vessels operating around the world.