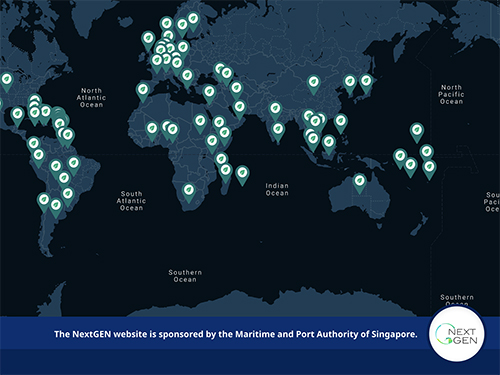 The International Maritime Organisation (IMO) and the Maritime and Port Authority of Singapore (MPA) have joined forces to launch the NextGEN web portal, a system that brings stakeholders together to identify gaps for decarbonisation in the international shipping industry.

The portal was designed to serve as a circle of collaboration between different stakeholders involved in maritime decarbonisation projects and encourages sharing information on new low and zero-carbon fuels.

Stakeholders connected to the portal include ports, governments, companies and research institutes.

“The single biggest challenge we face is the battle against global warming and climate change,” said Kitack Lim, Secretary-General at IMO.

“We need more collaborative action to speed up emission-cutting technology in the maritime sector and into zero and low-carbon marine fuels. Above all, we need to make sure we leave no one behind.”

The NextGEN portal already covers over 140 projects from over 500 partners and 13 fuel types. Africa, the Caribbean, Latin America, the Middle East, and the Pacific Islands are just some of the countries the portal is already involved with.

Quah Ley Hoon, Chief Executive of MPA, added “we cannot tackle decarbonisation alone. We need to work together, across borders and value chain, to build capacity, share best practices and ensure a level playing field for all. By bringing ideas and stakeholders together, NextGEN builds on the key principle of inclusivity.”

The NextGEN portal was inaugurated in Singapore in April 2021 during the Future of Shipping Conference which both IMO and MPA were involved with.

Previous efforts from the MPA to reduce carbon emissions include overseeing the development of a electricity-powered vessel, this project will be developed over the next five years.