From trials to scale-deployment: Largo Robotics’ autonomous tow tractors get to work for industrial transport automation 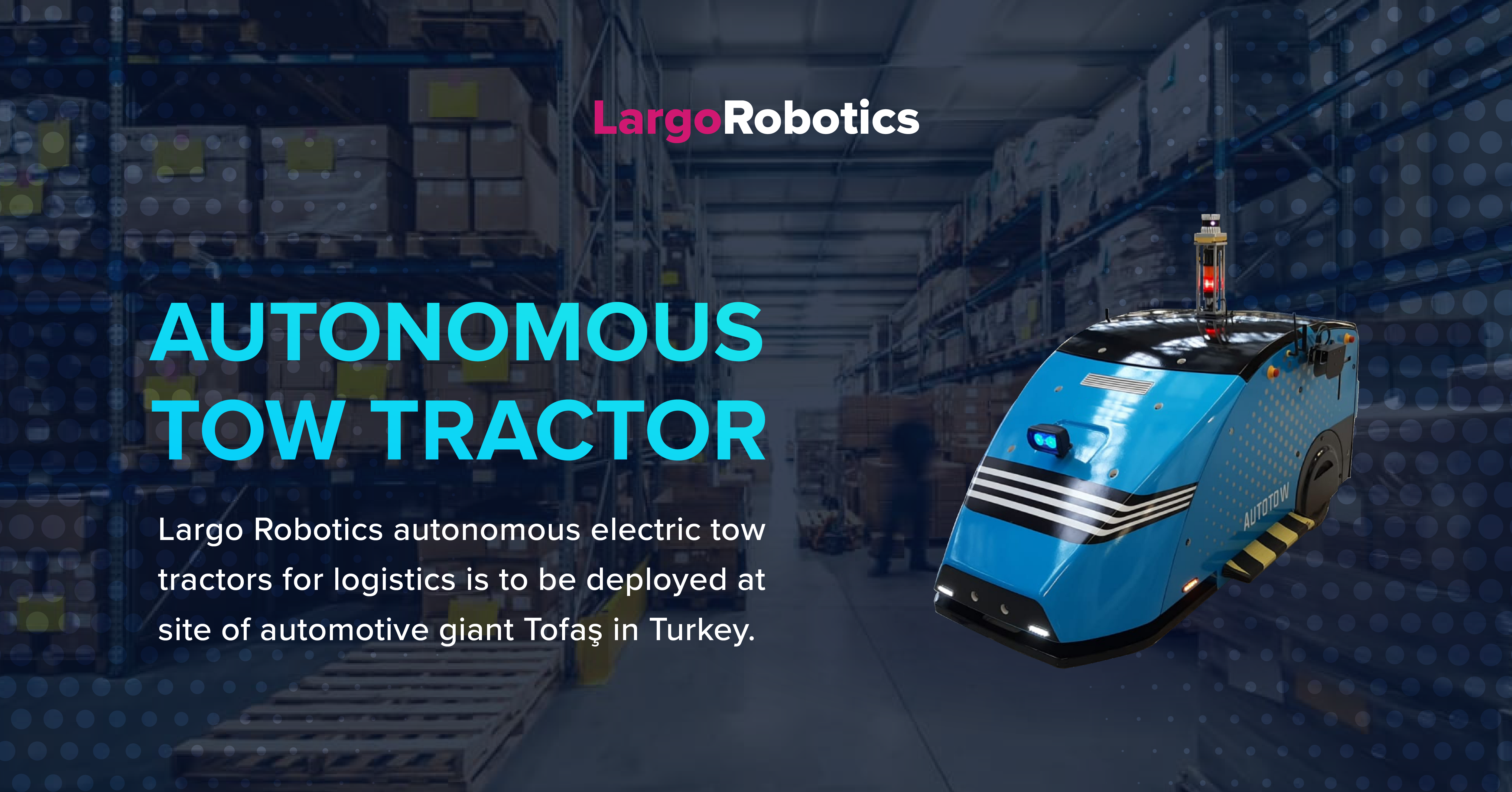 Largo Robotics has announced that a fleet of its unique autonomous electric tow tractors for logistics is to be deployed at the manufacturing site of automotive giant Tofaş Turk Otomobil Fabrikasi in Turkey.

With the agreement signed between Largo and Tofaş, the technological cooperation already achieved and the growth plan for the coming years have been formalised.

After two years of extensive testing and successful trials, the first 25 AutoTow vehicles will be introduced in its initial scale; ultimately, Largo is to deliver 150 of the autonomous tow tractors, to support Tofaş’ warehouse and assembly operations for productivity and efficiency.

With production capacity for 450,000 vehicles a year at its 1 million square metre plant in Bursa, Tofaş is Turkey’s eighth biggest industrial enterprise. The only company in Turkey that manufactures both passenger cars and light commercial vehicles, it is a partnership between Koç Holding and Fiat Chrysler Automobiles (FCA).

Largo, based in Istanbul, is a subsidiary of UK-based Aidrivers, a specialist in AI-enabled autonomous solutions across industrial mobility. Aidrivers is supplying its flagship Autonomous Intelligent Operating System (AIOS) software for the AutoTow.

The AutoTow, a fully autonomous towing tractor, can tow payloads of up to five tons and will be made available for ten tons in 2022. It can be used for both indoor and outdoor transport automation.

It uses HD 3D mapping and localisation to navigate autonomously without the need for infrastructure change or environment upgrade and has several state-of-the-art sensors for ultimate operational safety.

Equipped with two 2.7kW DC motors, the AutoTow is the first of its kind CE certified platform and has a maximum speed of two metres per second. It is fitted with automatic trailer connection, obstacle avoidance technology and a host of other safety features.

Flexibility is one of the AutoTow’s many strengths; it can operate in mixed traffic environments, including on the road. Its ability to operate and mix with real traffic in different weather conditions has been demonstrated and, crucially, the vehicle is already CE certified.

The agreementwith Tofaş underlines the value of Largo’s AutoTow in warehouse and logistics operations through effective implementation of autonomous utility vehicles; the autonomous towing vehicle is also highly suited to airport operations and is expected to be in demand in many other sectors.

“After two years of hard work and trials, Largo is now deploying the AutoTow at scale in the Tofaş warehouse, demonstrating effective implementation in the demanding operational environment of an automotive production plant,” said Aidrivers founder and CEO Dr Rafiq Swash.

“Warehouse logistics automation is increasing rapidly and Largo’s unique solution offers a proven, CE-certified solution. This is not something ‘for the future’ – the AutoTow is ready, and the market needs it to handle the increasing demands and pressures of the global supply chain.”

The decision to implement Largo’s AutoTow at Bursa reflects the innovative approach of Tofaş.

The Tofasautomotive group was named by Turkey’s Ministry of Science, Industry and Technology as ‘Best R&D Centre in the Automotive Industry’ in both 2016 and 2017, and its R&D centre was also placed first among Turkish entrants in the European Union’s ranking of companies based on their R&D investments for three years in a row.