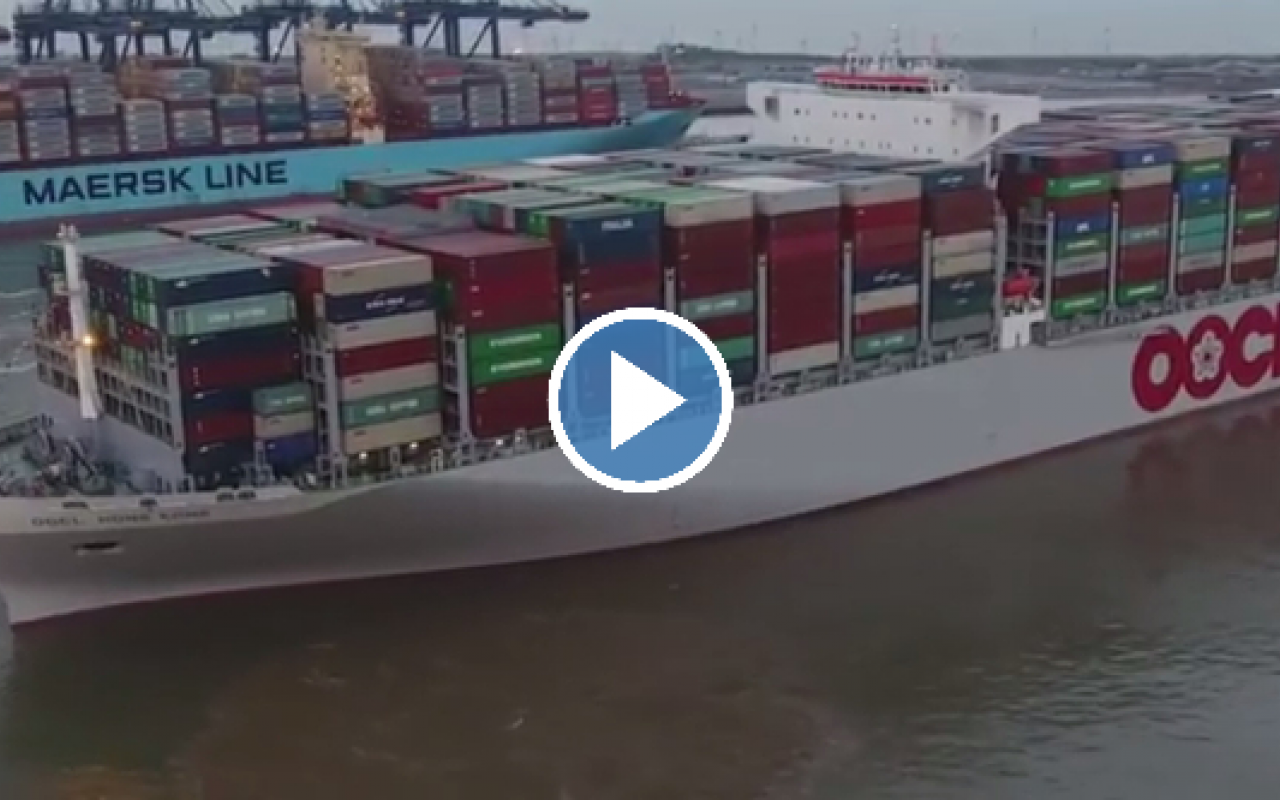 A drone has captured the moment that the world's largest container ship, the 21,413 TEU OOCL Hong Kong, made its maiden call at Port of Felixstowe.

The call represented a double celebration it also marked the return of OOCL to the UK's largest container port after a 17 year absence.

After being christened in May, the OOCL Hong Kong has been on a journey ftrom Asia to Europe.

OOCL is part of the Ocean Alliance, the biggest container shipping company grouping in the world, formed of OOCL, CMA CGM, Cosco Shipping and Evergreen Line.

After visiting Shanghai, Ningbo, Xiamen, Yantian, Singapore, Suez Canal, the OOCL Hong Kong's 77-day maiden voyage is nearly at an end as it only has the ports of Rotterdam, Gdansk and Wilhelmshaven to go.

“The port's location close to the main shipping lanes and the ports of Northern Europe, combined with a unique combination of road and rail connections, makes it the first choice for the latest generation of giant container ships.

“Our relationship with OOCL goes back 40 years and we are delighted to welcome them back to the Port of Felixstowe as part of the Ocean Alliance. We are honoured to have been chosen as the main UK hub for the Ocean Alliance and look forward to continuing to work with OOCL and the other alliance partners to provide the best possible service to UK importers and exporters.”

The 210,890 gross tonne vessel was built at Samsung Heavy Industries' (SHI) shipyard in Geoje, South Korea. Measuring 400 metres in length and with a width of 58.8 metres, the OOCL Hong Kong serves the Asia-Europe trade lane as part of OOCL's LL1 service.

OOCL Hong Kong is one of three new ships that have broken the record so far in 2017 after the 20,568 TEU Madrid Maersk came on the shipping scene in April to trump the 20,150 TEU MOL Triumph's title claim the month before.

Drewry recently reported that the top five carriers will control a little under 60% of the world’s containership fleet by 2021.

Video credit: IT'S ALL ABOUT RC!