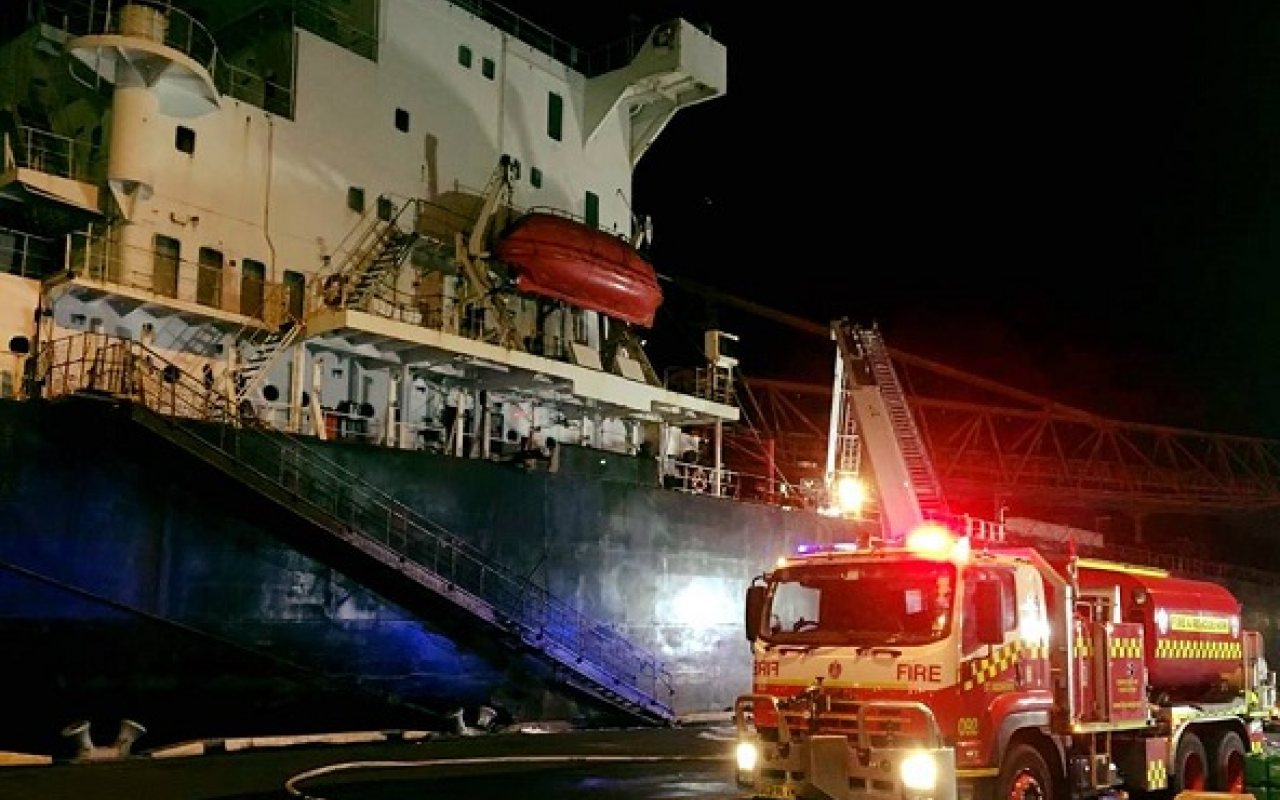 New South Wales firefighters are still fighting a fire that broke out on a bulk carrier loaded with iron ore at Port Kembla in Australia.

A deployment of more than 100 personnel have so far tackled the blaze, which was first reported by the fire service as having started on the deck of the ship ‘Iron Chieftain’ on June 17.

All 22 crew of the CSL-owned ship are safe with no injuries and no instances of fuel or oil leaking from the ship.

On the morning of June 18, several tugboats shot water on the ship’s side for several hours to reduce the temperature of a 12,000 cubic-metre pile of dolomite — a non-flammable sedimentary rock.

On June 19 at 01:47 am GMT, Fire and Rescue New South Wales released a statement after working “tirelessly” overnight to control the large blaze.

It said: “Crews have extinguished the fire on the conveyor belt on the outer deck of the ship, but there is still an active fire in sections of the cargo hold.

“About 80 firefighters remain on the scene and operations are expected to continue for some time today.”

The port closed to marine traffic when the fire first started, but it has since reopened without further disruption.

As of June 19 at about 8 am GMT, fire crews reported that a port authority tugboat was monitoring the situation and applying water to the hull to cool its fuel tanks, and that the firefighting operations would continue into the evening.

In a statement featured in the Australian newspaper Illawarra Mercury, Fire and Rescue NSW Assistant Commissioner Paul McGuiggan, said: “It’s going to take some while for the [foam] to actually seep down through and get into the lower parts the bilge parts of the ship.

“For the fire to actually get involved in that particular product [dolomite] it would have taken a fair amount of burning.

“What crews have been able to do is actually get onto the deck part of the ship and at various times were able to get into … parts of the hold.

“That has proven a challenge because in the lower part of the ship … is enough space for about one person, and the water level sits up around your knees, so it’s not a very safe environment to put anyone.”

A conveyer belt, pictured overhead, is believed responsible for a blaze that continues to smoulder deep in the bowels of the Iron Chiftain at Port Kembla. pic.twitter.com/sthxB89rfy

PORT KEMBLA | #FRNSW update on fire in ship hold, 70 firefighters are fighting this fire, operations will continue for some time, no injuries reported. pic.twitter.com/pZU3oU2jdI

PORT KEMBLA | UPDATE: More than a 100 firefighters continue to battle a blaze on a ship carrying iron ore at Port Kembla. Booms are in place as a precaution, but there has been no fuel or oil leak. #FRNSW crews are fighting the fire from the wharf and deck of the ship. pic.twitter.com/zEW6RjWy3P

PORT KEMBLA | UPDATE: #FRNSW firefighters have moved to an offensive strategy as they work to contain a fire in the cargo hold of a ship. The vessel is structurally sound and there has been no fuel or oil leak. Booms are in place as a precaution. pic.twitter.com/fdliCthfwS

PORT KEMBLA | UPDATE: Firefighters worked tirelessly overnight & extinguished the fire on the conveyor belt on the ship's outer deck. There's still an active fire in the cargo hold. About 80 firefighters remain on scene & operations are expected to continue for some time today. pic.twitter.com/2Aw3krvRJN

There’s been little time for firefighters to admire the sky over Port Kembla as they battle a fire in the cargo hold of a ship. Crews are fighting the fire from the wharf & deck. A tug is also applying water to the hull to cool its fuel tanks. Ops will continue into the evening. pic.twitter.com/cl6Z1anPBW

Port Kembla harbour is closed to all shipping as fire crews deal with a fire on the Iron Chieftain. pic.twitter.com/4nl7g37bM5