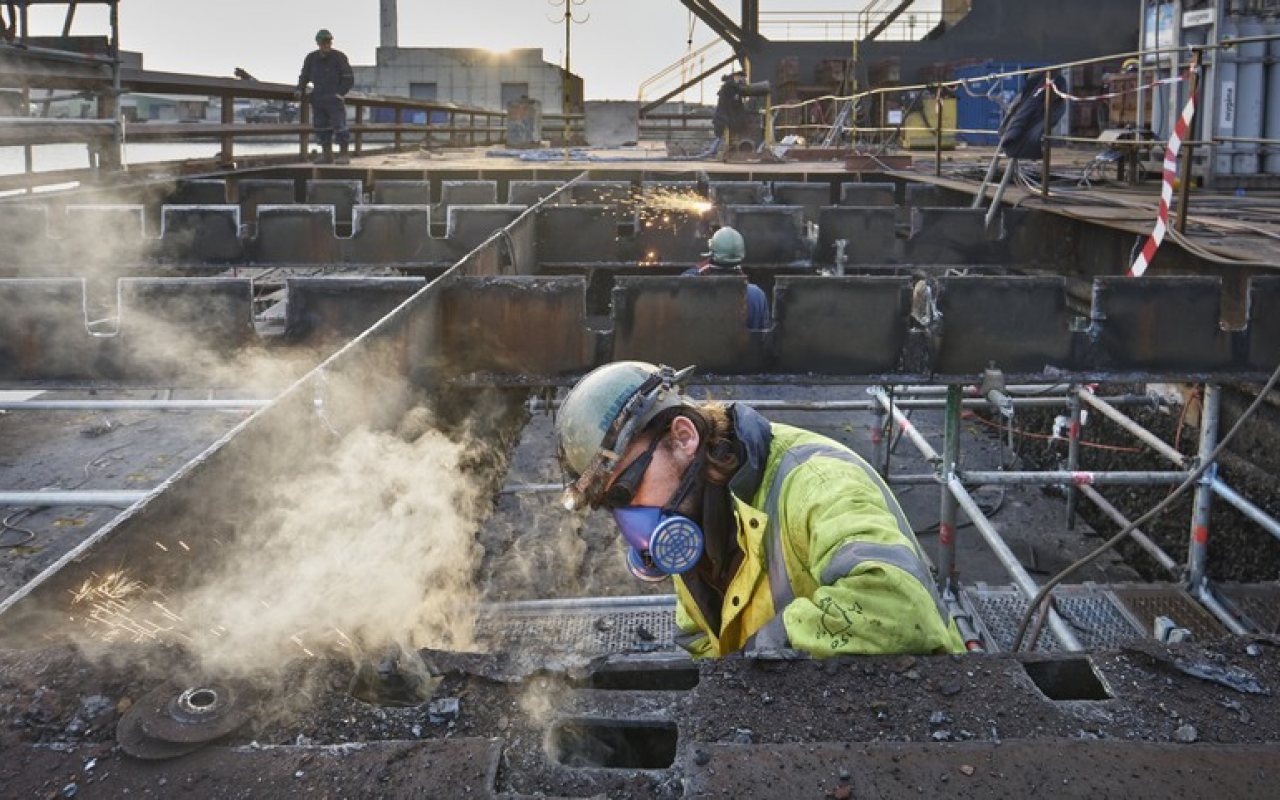 Damen Shiprepair Dunkerque (DSDu) has completed major refurbishment works on the Port of Dunkerque’s (GPMD) floating dry dock, which is capable of taking vessels up to 180 metres in length and lifting 14,000 tonnes.

Owned by and operated by DSDu, the yard is a major piece of ship repair infrastructure and an important for repairing and maintaining a wide range of vessels.

The renew contract was awarded to DSDu after a public tendering process for the replacement of 700 tonnes of steelwork, 16,000 metres of new welding and the application of 12 tonnes of paint, which was required after 30 years of service and only minor repairs on the tank top.

The project also demanded a fast turnaround of just three months to remove the old steel, fabricate and fit the new tank top and then apply the special paint system.

To prepare for that, a dedicated team of 10 engineers spent the previous four months undertaking studies and getting everything ready for work to begin as soon as the dock ceased operations.

Then 170 people worked round the clock to cut out and remove the old floor, prefabricate the new steel sections and then install the new structure before finally applying the anti-corrosion treatment.

Read more about Damen in the PTI Supplier Directory

In addition, a new access pontoon for the dock called Dynamo was added.

Originally a Damen Stan 5213 pontoon, it was adapted by the yard for its new purpose.

Work on the dock began at the start of September 2016 and was completed in mid-December, just in time to receive the first ferry – P&O’s European Seaway – marking the start of DSDu’s annual winter refit season.

Achieving this deadline required close cooperation between DSDu’s steel workers at every level and the various project partners including Quadrant Marine and NIDAB.

The work was jointly funded by GPMD, the Hauts-de-France Region and Damen Shiprepair Dunkerque under an agreement signed in 2012 when Damen first arrived at the yard.

The strategic location of Dunkerque near to major shipping lanes and at the heart of the ferry traffic crossing the English Channel / Le Manche makes it a convenient location for ship repairs.

Since P&O’s European Seaway, the newly refurbished dry dock has accommodated various vessels including ferries, a bunker-tanker and a floating training school for welders operated by Allseas.

Bob Derks, Managing Director DSDu, said: “The refurbished floating dry dock will give us at least 25 years more service and represents a valuable upgrade to our capabilities.

“We are very pleased that GPMD entrusted us to undertake this major project.

“It demonstrates the successful partnership that continues between the Port of Dunkerque and Damen Shiprepair Dunkerque, and the willingness of both parties to invest for the long term to ensure a bright future for the port, the yard and all those that work in them.”