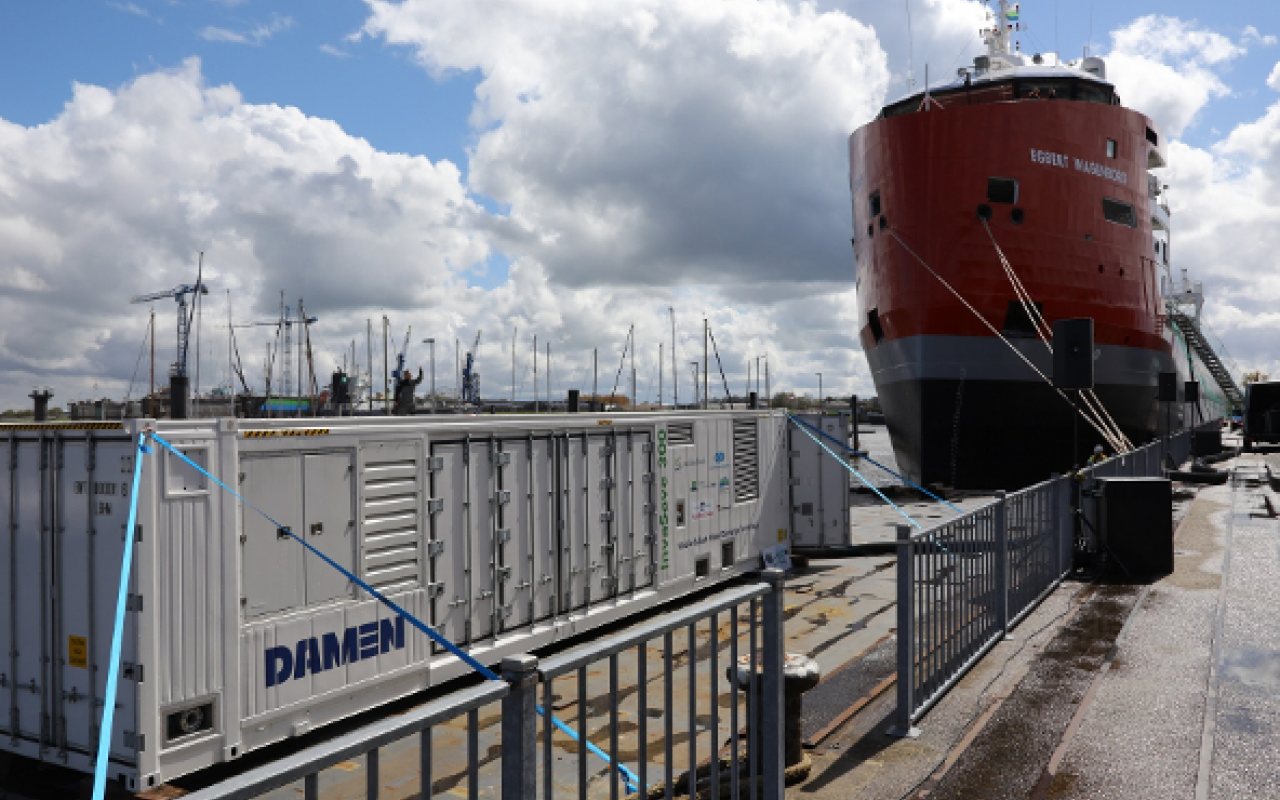 Damen’s award-winning and IMO certified InvaSave ballast water management system (BWMS) received its world premiere at the harbour of Delfzijl and Eemshaven, the Netherlands, on April 25, 2017.

The premiere showcased InvaSave to representatives from port operators and authorities, ship owners and other maritime organisations in a joint presentation between Damen Shipyards, the designated operator MariFlex, Groningen Shipyards, and Royal Wagenborg.

MV Egbert Wagenborg, a newly launched general cargo ship, was brought alongside a quay and the containerised InvaSave 300 mounted on a barge in front of the bow (pictured above).

Ballast water was then pumped out of the ship and passed through the InvaSave for treatment before being released into the harbour.

The premiere marked the culmination of a seven-year programme to develop an effective mobile BWMS for use in ports.

Damen claims that InvaSave is the world’s first external ballast water treatment unit designed primarily for use in ports.

On the 25th of April Anneke Schäfer, Director of Nature and Environment Federation Groningen, gave the official go for the new ballast water system in the North Sea ports

It can also deliver water treated to the same standard to outbound vessels.

A mobile, containerised format means that it can be operated from the dockside or from onboard a vessel alongside.

The new unit is now ready for operations at the harbour of Delfzijl and Eemshaven for vessels either without, or with malfunctioning, onboard BWTS capability.

MariFlex also plans to have a second operational in Rotterdam ahead of the September implementation of the IMO Ballast Water Management Convention.

Philip Rabe, responsible for InvaSave sales at Damen, commented: “We’re delighted that the Damen InvaSave is finally operational in a commercial environment. It is a unique product and, in many cases, it enables ports to offer vessel owners a viable and cost-effective alternative to retrofitting on-board systems.

“And, in the event of failure of an onboard system, ports can offer owners a means by which they can access ballast water treatment at short notice, ensuring minimal downtime.”