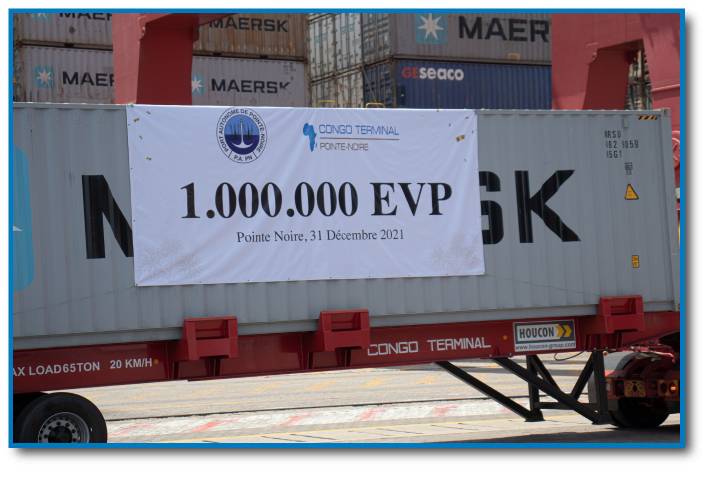 Congo Terminal, a subsidiary of Bolloré Ports, has exceeded a major container threshold in 2021.

Through the year, the terminal handled a total of 1,003,734 TEU, reflecting the efforts made by Bolloré Ports to increase traffic from 200,000 TEU to 1,000,000 TEU in accordance with the commitments provided for in the Modernization Plan of the Port of Pointe-Noire.

Bolloré Portsa has invested more than 400 million euros to modernise the infrastructure and equipment of the terminal. These investments made it possible to extend the L and R berths to 1,500 linear metres and to increase their depth to 15 metres.

Over the last decade, the operator has also carried out development work by building storage areas covering an area of more than 32 exploitable hectares and a multimodal logistics zone connected to the CFCO rail network.

Furthermore, the terminal has since also acquired the Navis 4 operating system for the management and automation of operations.

“Now that we have crossed this symbolic threshold, our ambition is to become a transshipment hub to promote the development of the national economy and the sub-region but also a smart port concerned with the environment.”

Anthony Samzun, General Manager of Congo Terminal, added “Beyond the functional framework, we have chosen to extend our commitments to include all stakeholders through an ambitious CSR policy.

“This is evidenced by the creation of the Green Terminal label by Bolloré Ports, an approach validated by Bureau Veritas which aims to support the development of port infrastructures that are more respectful to the environment.”