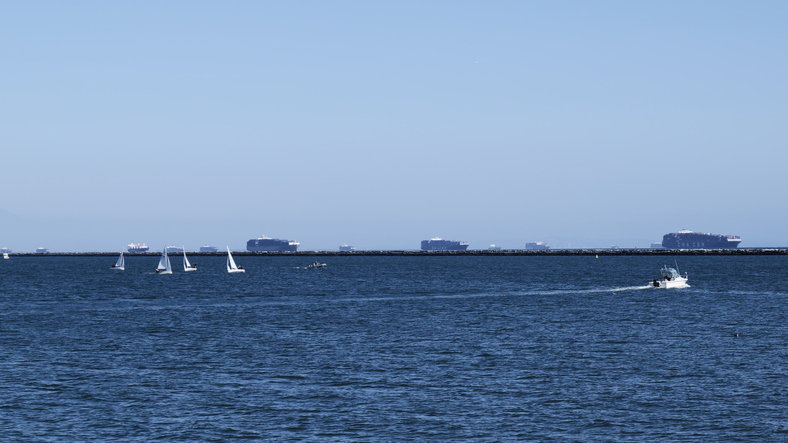 Congestion in Southern California is slowly improving as data shows fewer container ships are waiting to berth at the ports in the San Pedro Bay.

According to the Marine Exchange of Southern California, on 4 February, a total of 89 container vessels were backed up at Ports of Los Angeles and Long Beach. This is 11 fewer than the number recorded on 28 January and 20 fewer than the peak of 109 on 9 January.

While the number remains high, this is a significant improvement on what was recorded throughout January 2022, as numbers were continually over 100 vessels.

“Looking back to January, 376 vessels arrived, four fewer than the ‘normal’ level of 380 pre-COVID. 89 ships remain backed-up, but they are safe now and efficiently moving toward the ports when their berth is available,” said the maritime organisation.

Total ships loitering within 25 miles of the twin ports also reached zero, down from 62 when the new queuing system for labour started on 16 November 2021, administered by Pacific Maritime Management Services (PacMMS).

On top of this, the problem concerning long-dwelling containers on the docks of the twin ports is also showing improvement.

This explains the further delay of the “Container Dwell Fee”, as both ports recently announced consideration of the policy will now be postponed until 11 February 2022.

Despite seeing improvements, Gene Seroka, Executive Director for the Port Los Angeles, recently told PTI that the port will not hesitate to implement the fee if needed.

Overall, shipping experts believe it may be some time before this congestion is completely solved.

“The amount of time it will take to revert to normality globally can be substantial. Analysis published by Sea-Intelligence shows it could well be eight to nine months or longer before we are back to a fully normal operational status,” said Jensen in a social media post.