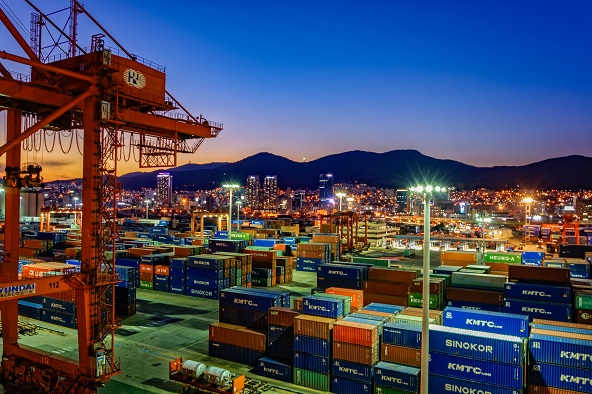 LASE, specialists in container handling solutions for the ports and terminals industry, has announced that its Unremoved Cone Detection (LaseUCD) has been successfully rolled out at the Port of Busan, South Korea.

According to a statement, the LaseUCD, which is designed to detect whether twistlocks are still connected to the container while being lifted by yard cranes, was launched at Busan’s PNC Terminal.

In addition, LASE has been awarded with up to 69 orders to increase the safety in the terminal.

What are the risks of unremoved cone in container terminals?

In container terminals, it is a common problem that container cones are not completely taken out and stay attached to the container after being unloaded from the vessel.

It has been estimated that more than 2 billion cones are removed manually worldwide in every year.

This bears several potential risks. For example, when a container with connected cones is transported to the yard and dropped on another container, it will be locked with this subjacent container by the self-locking function of the cone (interbox connector).

Later on in case of a pick of this container, both containers are lifted up at the same time! As a consequence during crane travel over the yard other containers can be hit and fall into the yard or truck lanes.

How to prevent lifts with connected containers?

The system consists of two 2D laser scanners which are mounted at the sill beam of a yard crane in a height of approx.

When a container is hoisted from the truck chassis by the yard crane it passes the scan plane where the profile of the container is scanned.

The scan data are processed in the application software LaseUCD, which generates a 3D point cloud of the containerin the first step.

In both cases the application software sends an alarm signal to the PLC in order to stop the crane hoist move and to undertake a visual inspection of the detected container issue.

Hoist moves with skew, tilt or trim angles of the container under the spreader do not have any influence on the reliability as well as the container type (20, 40 or 45ft) or the different cone design.

Jason Hwang, Engineering Team Leader at PNC Terminal, said, “It was a great cooperation between LASE and PNC.

“From discussing the idea with LASE as well experienced laser measurement solution provider, over to creating a common project to qualify the solution within an extensive trial and up to the final decision of implementing such kind of system in our complete fleet of Automatic RMGs.

“It’s well engineered system and we’re looking forward in preventing the safety risk in our terminal!

Lars Ambrosy, Chief Executive Officer at LASE GmbH, said, “We like to thank PNC again for this fruitful collaboration and appreciate all their effort for giving us the opportunity to develop this system.

“Due to the previous success of our system for truck lifting prevention they asked us to develop such a system in order prevent double container lifts and to have a safe operation.