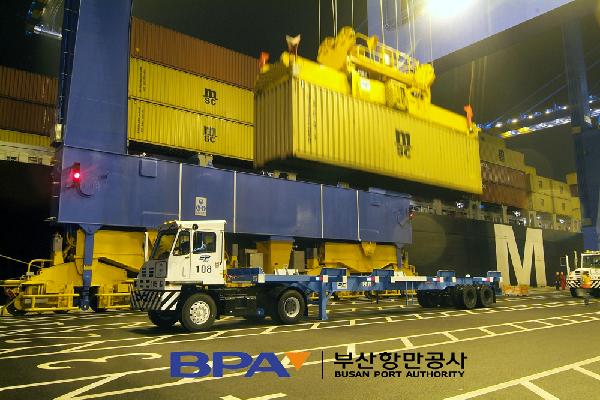 The BPA selected the Consortium as the preferred bidder through open bidding on 20 August 2021 and has since been negotiating the details of the provisional contract. However, negotiations have been delayed for verifying the volume attraction plan, as proposed by the Ministry of Oceans and Fisheries and to consult with shipping labour unions.

A provisional lease contract signing ceremony was held on 29 September 2021 and was attended by Nam Ki-chan, CEO of the BPA, Park Sung-soon, CEO of the Dongwon Consortium, alongside executives of Hanjin, in charge of the work and employees of each company.

The Dongwon Consortium is now set to operate a terminal of six berths and a feeder terminal for 30 years from July 2023. It will provide state-of-the-art loading services using automated equipment that the BPA intends to set up. This includes nine container cranes and 46 transfer cranes.

The Dongwon Pusan Container Terminal, a member of the Consortium, plans to transfer the volume and workforce from the North Port Singamman Terminal to the New Port. This aims to minimise excessive competition created by having multiple terminal operators at New Port.

Hanjin, the largest shareholder of the adjacent Terminal 3 at the New Port, is expected to lay the foundation for the integrated terminal operation between Terminal 3 and the West Container Terminal through equity participation.

Ki-chan, added “We tried our best to implement the request of the Ministry of Oceans and Fisheries as much as possible, such as additional verification of volume creation, review on legal feasibility, and consultation with shipping labour unions.

“The provisional lease contract with the preferred bidder is the best solution considering it is in line with the government policy of gradual transfer of container terminal functions to the New Port. It will also stabilise port workers’ jobs, lay the foundation for integrated terminal operation, address the excessive foreign capital issue in the New Port terminals, and secure the financial soundness of the construction.

“In regard to transferring workforce to New Port, we will continue to work so that port workers’ jobs are stabilised.”

The BPA has also established the Busan New Port West Container Terminal Preparation Council with the Dongwon Consortium so that the terminal can open as scheduled in July 2023.

The Port of Busan has also developed a long-standing relationship with the Port of Barcelona, recently joining forces to open the Korean logistics platform in Logistics Activities Zone (ZAL) in Barcelona.

The Port of Busan holds a 51% stake in the B2B Logistics Busan & Barcelona Hub S.L., while the Port of Barcelona holds the remaining 49%.