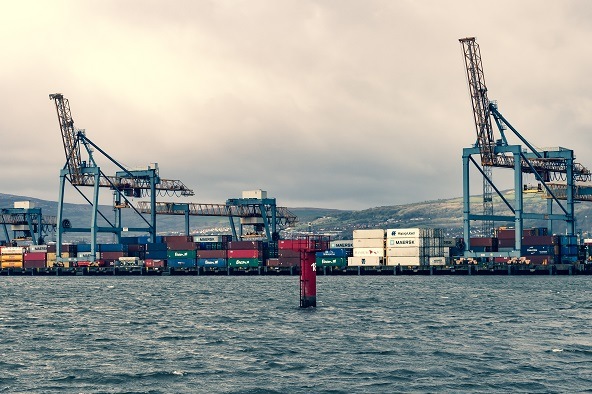 Belfast Harbour has revealed a US$48.9 million expansion to its container terminal at Victoria Terminal 3 (VT3), as part of its 2035 Strategic Outlook which aims to turn it into a ‘Smart Port’ and the ‘Best Regional Port in the World’.

In a statement, Belfast Harbour said the three-year project will see it invest approximately $34.2 million in ten new cranes and undertake major civil works to reconfigure the 27-acre terminal. Initially, it will aim to increase capacity by 30% and boost overall operational efficiency.

Exclusive Paper: Ports Must Be Smarter To Thrive In The Future

Furthermore, it said the investment in new larger state-of-the-art cranes and a new terminal layout will “futureproof” the terminal and ensure it will be able to handle larger ships.

Two Ship-to-Shore (STS) cranes have been purchased from Liebherr Cranes, the first of which will be delivered in Q1 2020.

The investment will also include eight new Kalmar Rubber Tyre Gantry (RTG) cranes, which are faster and more versatile than the current yard cranes and be operated remotely.

The first five RTGs will be delivered in November 2019 with the first two RTGs commissioned and ready for use in early Q1 2020.

The terminal is a key hub between Northern Ireland and the major European hubs, including Rotterdam and Antwerp.

Michael Robinson, Belfast Harbour’s Port Director, said: “This investment programme will future-proof the terminal for a generation as well as utilise the most modern technology making Belfast Harbour one of the world leaders through the implementation of Rubber Tyre Gantry remote control and stack automation technology.

“Long-term, we anticipate that the container market will continue to grow and surpass pre-recession levels and as a port we need to be ready to handle these volumes.”

What is a Smart Port?

As Port Technology explained in an exclusive insight in August 2019, A Smart Port is a port that uses automation and innovative technologies including Artificial Intelligence (AI), big data, Internet of Things (IoT) and blockchain to improve its performance.

The need to evolve and become “smart” is even more paramount today with the changing demands of global trade; ships are getting bigger, goods are moving faster, and geopolitical conflicts are creating new challenges for ports all around the world.

To understand the importance and subsequent growth of Smart Ports, make sure to attend the Smart Digital Ports of the Future Conference in Rotterdam.