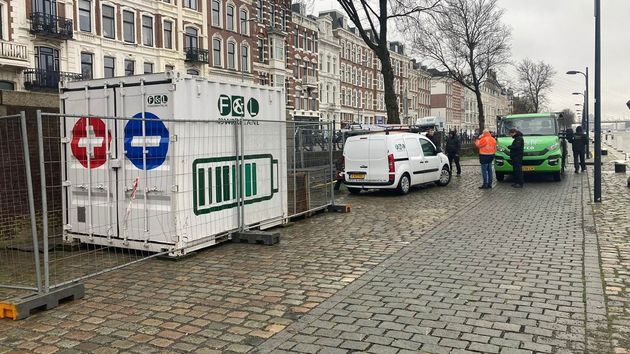 Skoon Energy has installed a battery system on behalf of the Port of Rotterdam Authority to strengthen the local shore-based power supply for inland shipping for CEMT class V vessels and higher.

In the centre of Rotterdam, there is a ban on generators for inland navigation vessels lying idle. The inland shipping sector can make use of shore-based power in this instance.

However, some ships need more power than the facilities can provide, the Port of Rotterdam wrote.

Since 2010, shore-based power boxes for inland shipping have been installed at around 60 locations in the centre of Rotterdam. These boxes can supply shore-based power to four to six inland vessels up to a maximum of 40 Ampere (40A).

In today’s industry, some larger inland vessels (in CEMT class V and above) require more power. To meet this demand without having to take drastic measures, the Port Authority has opted for this solution.

In previous scenarios, other inland vessels can no longer use this shore-based power connection until the compartments have been repaired. Linking the battery system prevents this situation and also makes it possible to provide larger ships with shore-based power.

Shore-based power is an important part of the energy transition for the Port of Rotterdam. Ships moored at the quay often run on generators for the energy required on board.

This involves emissions of, among other things, particulate matter, nitrogen and CO2. Shore-based power offers the opportunity to reduce these emissions by providing ships with a clean energy source.