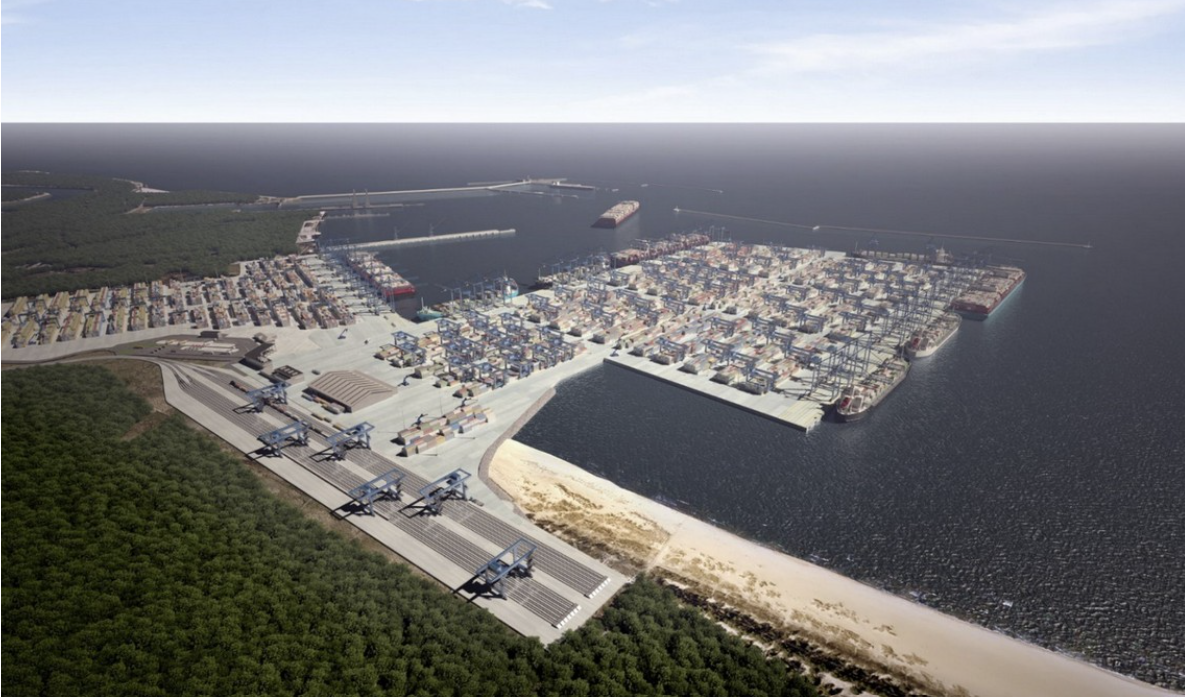 Works have begun on the new flagship container terminal built on the Baltic Sea as part of the Port of Gdańsk.

On 28 November 2022, Baltic Hub (formerly known as DCT Gdańsk), the operator of the largest container terminal in the Baltic Sea, ceremoniously kicked off construction of its third deep-water Terminal – T3 in the presence of the Polish Secretary of the State in the Ministry of Infrastructure, Marek Gróbarczyk.

When fully completed in the second quarter of 2025, the new terminal will have a 717-metre-long and 17.5 metre deep quay wall.

This will be Baltic Hub’s third deepsea berth that can handle the largest container vessels in the world.

READ: The largest port in Poland is the fastest growing European port of the last decade

The T3 project will be open for commercial operations after the first phase is completed in the first half of 2024.

The construction of the T3 project will be executed in two phases. In a first phase, the consortium of the companies Budimex and DEME will build the 36 hectare terminal area next to Terminal 1.

In the second phase construction of the 717-metre-long, 17.5 metre deep quay wall will commence.

This is scheduled to start in early 2023 and completed in the second quarter of 2025.

The T3 project also involves the purchase of seven quay cranes that are capable of handling the world’s largest vessels, as well as 20 semi-automated Rail Mounted Gantry (RMG) cranes for the container yard, which operators will be able to control remotely from ergonomically-designed workspaces.

Baltic Hub is Poland’s largest container terminal and has experienced exponential growth from having just one deep-water quay and a capacity of 500,000 TEU when it was founded 15 years ago, to becoming a true ‘Baltic Hub’ with two deepsea quays that handled more than 2.09 million TEU in 2021 with a total annual capacity of up to 3 million TEU.

“Just 10 years ago, Poland was not a significant player in container handling”, said Marek Gróbarczyk, Secretary of State in the Ministry of Infrastructure, Government Plenipotentiary for Maritime Economy.

“Today, we are starting a historic investment – the largest container port. I think that the Management Board of Baltic Hub has not yet said the last word as their plans are very ambitious.”

The commencement of construction works at the new T3 Baltic Hub terminal completes the stage of work on executive designs and preparation of the construction site.

These activities have been carried out as part of the ‘early start’ since the Budimex – Deme consortium signed the contract in July 2022. Now the consortium is starting works on the construction of a new terminal.

The dredging of the sea route to the new terminal and the reclamation works under its basic structure will begin. These works will be carried out, among others, by a special dredging ship and using the appropriate material from the bottom of the sea to construct a platform that will form the base of the new terminal.

In addition, the consortium will begin to build tight walls around the future terminal.

“The construction works themselves assume the execution of excavation works with a cubic capacity of over 4 million metres-cubed, the construction of a mooring line with a length of over 700 metres,” said Cezary Łysenko, Director of the Infrastructure Construction Division of Budimex SA.

The T3 terminal itself will have an area of over 360,000 metres-squared, an operational depth of 17 metres and will be semi-automatic, which is a novelty in Poland, Łysenko added.